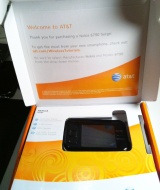 Sadly, for many, it's ergonomic awkwardness will easily overwhelm the Surge's many other multimedia positives.

The Nokia Surge is surprisingly feature-packed for its price, but the design has more than a few flaws.

The Nokia 6790 Surge for AT&T is a bit of a departure for the Finnish handset manufacturer. You wouldn't know it just by looking at it, but the little guy is actually a smartphone like the Nokia N and E series devices. It runs on the Symbian S60...

The phone has a number of design quirks and doesn't have the best build quality. You can't dial numbers without opening the keyboard.

The Nokia Surge offers AT&T's younger customers an affordable, feature-rich smartphone, but it has a number of design and interface issues.

The Nokia Surge offers texting fiends an inexpensive way to get a real smartphone, but it sits uncomfortably between texting devices and smartphones.

The smartphone market might be dominated by phones from Apple, HTC and BlackBerry, but there are some users, mainly teenagers, who can't afford high monthly phone bills. What happens then? The Nokia 6790 or Surge to use its American name is a QWERTY...

As an entry-level phone the S60 sporting Nokia Surge is best described as a mini mini N97 with some of the features stripped out.

The phone has a number of design quirks and doesn't have the best build quality. You can't dial numbers without opening the keyboard.

The Nokia Surge offers AT&T's younger customers an affordable, feature-rich smartphone, but it has a number of design and interface issues.

Rarely we come across a decent Nokia device sneaking its way onto AT&T's lineup that turns heads. For the longest of times, they've been offering basic flip handsets that really doesn't do justice to the world's number one phone maker. Fortunately...

At first glance with it's slide-out keyboard and black plastic casing, you might think the Nokia Surge is intended to be a high-end messaging phone and perhaps that was the case. However, this Nokia is a smartphone and includes all the features...

The prolific cell phone manufacturer Nokia produces such a high volume of models that surely one will fit your needs. The Nokia 6790 Surge, however, while a competent phone, may not be the best choice. The reason I say it may not be your best choice is...

Nokia Surge makes an excellent messaging phone, with an astonishing hardware QWERTY keyboard. This article reviews the phone in detail, examining the design, user interface and all the various features in depth.