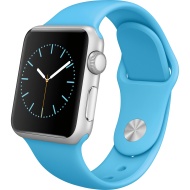 There has been one firmware update , mostly addressing performance and reliability (and adding extra language support, plus access to more emoji). Otherwise, for the most part, the Apple Watch still does what it did before. I still use it in the same...

The Apple Watch is a beautifully constructed, compact smartwatch. It's feature-packed, with solid fitness software, hundreds of apps, and the ability to send and receive calls via an iPhone.

Battery only lasts a little more than a day; most models and configurations cost more than they should; requires an iPhone 5 or later to work; interface can be confusing; sometimes slow to communicate with a paired iPhone.

The Apple Watch is the most ambitious, well-constructed smartwatch ever seen, but first-gen shortfalls make it feel more like a fashionable toy than a necessary tool. That may change with a big software update later this year, though.

I bought this watch after finding out that the materials and different and more durable than the Sports Edition. My GF loves it.

Orange is The New Black

Loving the orange color band to go with the black Apple Watch. The quality of Apple Watch bands is definitely better than other cheaper brands on the market.

It is almost identical to the band that I got with my apple watch just a little bigger. But great none the less.

I bought the 38mm gold iWatch with the antique white sports band. I decided that I wanted the second band to wear for casual wear and to save the antique white for more dress up occasions. I changed the bands and wear the beautiful midnight blue on a...

The navy is a simple classic band that looks great on the gold watch. Goes great with everything.