No 3.5mm audio input ; Small screen ; Not that different to the 1st generation

This tiny smart display is incredibly easy to use, especially if you already own other Alexa devices. Its 5.5inch screen is slightly too small to use in a kitchen, but for a bedroom or small office, the Amazon Echo Show 5 (2nd Gen, 2021) is perfect.

The Echo Show 5 (2nd generation) is the new version of Amazon's smallest smart display, arriving almost two years after the Amazon Echo Show 5 (2019). While it may look identical to its predecessor, there have been some incremental updates to the...

The Amazon Echo Show 5 (2nd generation) is an affordable smart display that brings the benefits of seeing as well as hearing Alexa to those on a budget. It’s simple to use, it’s got an improved camera, and it comes in a new blue finish. While it’s a...

Along with a new Echo Show 8, Amazon has updated it smaller Echo Show 5 smart display. It's effectively the same smart clock radio as the previous model, with no significant changes to the screen or speaker, for the same $84.99. The camera sees a minor...

No significant upgrades from previous version 3.5mm audio output has been removed

The second-generation Amazon Echo Show 5 is nearly identical to the previous version, and remains a capable smart display for virtually anywhere in your home, particularly your nightstand.

Amazon's biggest Echo Show boosts the screen size and begs to be wall-mounted. But is it actually any good?

Widgets give display more flexibility ; Easy to mount on wall ; It looks great on the wall

The biggest Echo Show to date makes it easy to get Alexa's functions onto the wall and off your worktop - but the sound quality is surprisingly weak, and while the big display gives more space to play, it's not very well utilised, widgets can't be...

Not much of an upgrade, but the Echo Show 5 is still a good-value smart screen

Not the best sound quality ; No 3.5mm audio output

None of this means that the Echo Show 5 is a poor product. As a smart alarm clock for the bedroom, or a compact radio for your home office, it works brilliantly, and it’s unobtrusive enough to fit anywhere else around the house that might be missing an...

The 2nd-gen Echo Show 5 is almost exactly like Amazon's previous model, with the exception of a new colour and the ability to use it as a security camera.

The 2021 updates to Amazon's smallest smart display are minimal, but it's still good value if you want one for bedside alarm, clock, and radio duties.

Now equipped with a sharper camera and a proximity sensor, the new Echo Show 5 is better than ever, but the cheaper original remains an enticing alternative.

We’ve already established that there’s not much point in upgrading to the second-gen Echo Show 5 if you already have the first-gen version. But what if you’re a first-time buyer—is the new Echo Show 5 worth your money?

Just like with smartphones, smart displays are getting bigger each year. The new Amazon Echo Show 15 makes good use of its size in many ways with only a couple of missteps.

Excellent, large display ; Perfect for busy families ; Widgets make great use of the screen size ; Can be orientated in portrait or landscape

The Echo Show 15 blends the voice control of Alexa wonderfully with a sharp 15.6-inch display that offers various bits of visual information at a glance, thanks to the widgets. Whether it's hanging on a wall or resting on a tabletop, the Echo Show 15...

The Amazon Echo Show 5 (2nd Gen) is as cute, compact and capable as its popular predecessor. But it's arrived in a more saturated smart clock market than the version that came out two years ago. Now, the $84.99 Echo Show 5 is rivaled by the Google Nest...

The Amazon Echo Show 5 (2nd Gen) isn’t much of an upgrade compared to the original, but it’s still a compact and capable bedside smart display with a built-in camera and Alexa.

Amazon Echo Show 5 (2nd Gen, 2021) Review – The original Echo Show 5 has been on our bedside table ever since it was released. We've been using it daily to mainly control our Master Bedroom lights and also turn our TCL TV off. If you have lots of smart...

The power of Alexa in a compact design with 5.5″ display ; Touch screen ; Bright, clear display ; Can view the front camera remotely within the app ; 2MP front camera upgrade ; Built-in speaker

Not much upgrade from the previous model ; Still stutter here and there when interacting with the screen ; No more 3.5mm jack (but not sure how many are using this either)

A slight upgrade to the popular Echo Show 5 device 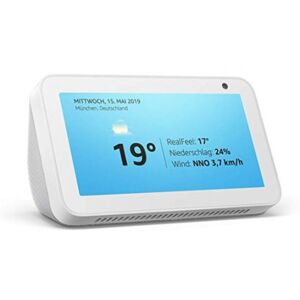