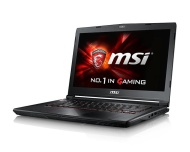 The MSI GS40 Phantom is a very interesting gaming notebook as it combines a 14" 1080p HD screen, with a powerful mobile Intel Core i7 6700HQ processor and an NVIDIA GTX 970M 3GB GDDR5 graphics card. How good is it? Read the review and see for yourself!

It’s said that good things come in small packages, but I am a firm believe that good things can come in any shape or size. When it comes to gaming, you don’t need to drop 10k on the best of the best to run games at their maximum settings and remain...

Another bad ELAN trackpad. More expensive than Gigabyte’s competing laptop. Not the greatest of cooling solutions.

Of the two 14-inch gaming laptops that I’ve reviewed recently, both with very similar high-end hardware, the MSI GS40 Phantom 6QE is the better option and the one I would ultimately recommend.

The MSI GS40 6QE Phantom proves more than a match for Star Wars Battlefront, and will be able to dispatch other Frostbite 3 games as well.

Fans operating even when not gaming Not so portable power supply (even though it is rated for 150W) Lots of preloaded MSI control softwares Very weak speakers for a gaming laptop Not exactly fingerprints proof......