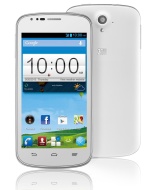 One positive is that ZTE uses an IPS display so despite the screen quality not being top notch, the viewing angles are good although it still suffers from the same reflectivity issues as older ZTE phones making it troublesome to use in the bright...

A new benchmark in an era of affordable smartphones?

ZTE continues its budget line-up with a remarkably well-constructed smartphone that, thanks to a vanilla Android experience and bargain price, makes it the perfect option as a secondary handset.

Chinese manufacturer ZTE has some pretty fancyhigh-end phones. But the Blade Q Mini definitely isn't one of them.It's a budget Android but one that aims to deliver somedecent specs where it counts while keeping the price very, verylow. Full review

Not a looker, so-so screen, low onboard memory, no front-facingcamera

The ZTE Blade Q mini is unlikely to be anyone's favourite phone.But for its bargain basement price it's a decently solid workhorsethat delivers pretty good smartphone functionality -- a nicesolution for kids or as a backup device when you're going...